With the African Continental Free Trade Area Agreement (AfCFTA) expected to reshape the economy, South Africa still has a lot of homework to do to in finalising its tariff schedule related to the agreement, says Trade and Industry Minister Ebrahim Patel.

The Minister’s comments follow on the12th Extraordinary Summit of the African Union (AU), which was held on 7 – 8 July 2019.

The AfCFTA was officially launched into its implementation phase at a Special AU Summit in Niamey, Niger, after 54 African countries signed the agreement and 27 countries ratified it.

Trading under the terms of the AfCFTA is intended to come into effect on 1 July 2020.

Patel said the initiative will connect 1.2 billion people into a single bloc where products will be manufactured, bought and sold between countries, without any trade tariffs.

For South Africa’s current administration, a lot more work still needs to be done to finalise the detailed modalities and benefits of the AfCFTA.

“We will finalise a tariff schedule immediately listing all products covered by the AfCFTA and the rules of origin that set out what qualifies as a locally-manufactured article.”

Patel said the agreement will change and reshape the South African economy.

“The agreement will fundamentally change and reshape the South African economy. Already, exports to other African countries support about 250 000 South African jobs and it is the fastest growing part of our manufactured exports,” said the Minister on Sunday.

Patel said over the period of the current administration, agreement on the following will be developed:

•           Investment protections for African companies operating in each other’s markets;

Patel said the coming into effect of the AfCFTA is a historic mission not without its own challenges.

“To realise the gains, we will need to address many challenges too, including a strong domestic and Africa-wide customs administration, systems to enable swift payments between countries; proper infrastructure connecting African countries with each other, and above all, getting the South African industry to be AfCFTA-ready through competitive-enhancing support,” he said.

Beyond the African continent, government we will work to increase the volume and address the composition of exports to shift from simply selling raw materials to the rest of the world and importing finished goods.

“Over the next few weeks, we will be concentrating on finalising terms of an agreement between South Africa and the UK in case of a no-deal Brexit to protect SA exports and jobs. We will engage the US around AGOA [African Growth and Opportunity Act] and point to the mutually beneficial impact thereof,” said Patel.

AGOA is a unilateral US trade preference programme that provides duty-free quota-free treatment for over 6 400 tariff lines from 40 AGOA-eligible sub-Sahara African countries, including South Africa into the United States market.

In November 2015, then US President Barack Obama announced that the duty-free entry into the US of South Africa’s agricultural exports under AGOA would end if South Africa’s health restrictions on the import of US poultry, beef and pork were not lifted by 4 January. However, the deadline was extended to 15 March 2016.

AGOA was reauthorised in June 2015 for 10 years until 2025, with South Africa’s inclusion. 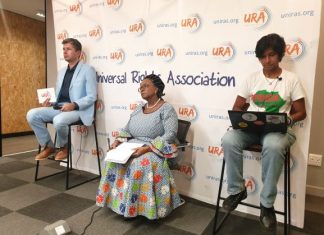